I’ll probably stop this experiment soon. The “30 days of (mostly) raw” eating thing is turning into a “one week of raw and it was driving me crazy so I have to eat some cooked food every day now” thing.

Brittany and I had a breakfast date this morning at Mint Tea in Vancouver, Washington (where I am typing this right now). The food is delicious and they have a lot of vegan options (but see update #2, below). They also have a cozy nook on the second floor, with a raised floor and pillows. You have to take off your shoes to sit there. It’s like a little slice of Morocco.

Update #2, 2013-10-21: It’s exactly one month to the date of publication, and I can’t recommend Mint Tea anymore. Yesterday morning Brittany and I were served a “vegan” breakfast burrito with an egg. The scatterbrained owner who runs the restaurant got our order mixed up and served our food to another couple (as I thought she had, since we ordered our food WAY before they had even sat down… but they got served first). She admitted the mistake, but it shouldn’t have been hard not to mix them up. There were only about 4 parties dining in the entire restaurant. Really sick to our stomachs after being served that egg. (Fried eggs have a distinct pungent odor.) We didn’t eat much of it before noticing, but it was a bad experience overall. We will never eat there again.

I have been slacking on this, partly due to work taking up a huge chunk of my day.

Push-ups (again). Got 28 on my first set, which is a new first-set seasonal record for me. I’ve been up to around 45 – 50 before, and I’d like to get to 100 if possible. I know it’s possible. I’m pretty sure I was following the hundred pushups plan when I got to my lifetime maximum.

I’m not sure if I can keep this up the full 30 days. Writing about this every day is getting to be a chore.

We found out last night that the cacao nibs that we thought were raw, weren’t. Thanks, Chuck’s.

random pushups to failure throughout the day

My wife and I went to Portland today to get new tyres put on the 4Runner. Actually, we went to Clackamas. Anyway, we were looking for a specific restaurant with some raw menu choices on Hawthorne Boulevard in Portland on our way back home.

And we saw this vegan Thai place which looked good. And we were hungry. So we decided to eat there, and that wasn’t raw.

Oh yeah, and as I was parallel parking the wrong way (forwards, instead of backing into the space), I freakin’ hit this girl’s parked truck. The impact was pretty loud, but there were only some small scrapes and her truck was pretty crappy looking any way (her words). She said it only cost her $600 for the entire pickup, and told me not to worry about it. I love Portland in moments like this. I gave her my insurance and contact info just in case something came up, and we continued to the vegan Thai restaurant across the road.

I’ve been forgetting to log my daily Brazil nut, so I went back and edited the posts from the first 2 days to reflect it. I eat one Brazil nut every day to ensure that I get my daily intake of selenium. More than one or two Brazil nuts per day can lead to selenium toxicity (selenosis).

* note to North Americans: This brand is actually pronounced Twine-ings (like the garden-string stuff). I’ve wanted to look it up for a few weeks now, and just did today. I had always just pronounced it Twin-nings, (like identical twins).

Basic stretches and random pushups to failure throughout the day. I can feel the soreness in my pectorals from pushups 2 days ago, and in my calves from yesterday morning’s jog.

I’m starting to take this more seriously now that I can feel the training affect my muscles. I’m going to locate a pull-up bar in a nearby park within the next few days and incorporate that into my weekly regimen. I will try and shoot for twice a week if time permits.

I believe exponential gains in strength can be achieved, even within short periods such as a few weeks, through consistent training in a few basic compound bodyweight exercises, such as pushups, pullups, and plyometric exercises such as burpees.

Since the body works synergistically, these should be accompanied with regular cardiovascular exercise. It’s like training only one body part (such as only biceps) vs a whole-body workout. Even the part you want to focus on will get better as part of a whole-body workout.

Today my wife and I went to Portland to shop. We decided to visit a vegan café to see if they had any raw options, which they did. They had a raw sunflower butter sandwich with raw zucchini pesto, and a salad bar with mostly raw stuff. Energy levels were about normal.

A light jog this morning, somewhere between 1/4 and 1/2 mile.

This is day 1, of my mostly raw 30-day diet. Most of these ingredients will be organic, unless there wasn’t an organic option at the store.

This is pretty much the sum total of what I’ve consumed this morning:

For lunch, Brittany made a kale-cabbage-walnut salad with avocados, and a blueberry-raspberry-banana smoothie to wash it down. Energy level at lunch seems higher than normal. I realize it just could be in my head. 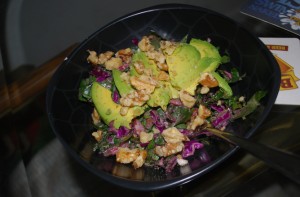 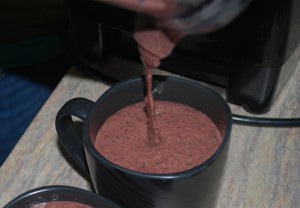 I really need to start doing more cardio. I should be doing cardio training at least 3 times a week. I also want to eat more greens throughout the day. Toward the end, I had too much orange cashew cream. I could feel the pushups start to burn in my arms and shoulders after only a couple of sets.

I look forward to more spinach and collard greens tomorrow, and to eating raw sliced beets as my superfood.

a word on beets

Beets really are a superfood. They don’t seem as exotic as Goji berries or Açaí, but they’re chock full of nutrients, anti-oxidants, and carotene. They have been proven to improve performance in some athletic studies (I read it on the internet), unlike some of those hyped-up marketed superfoods, like Maca root or Yacón. (Which is really just a jícama from Peru. Big deal, it’s a tuber.)

Beets will also turn your pee red. Everybody loves beets.

I decided today that I was tired of feeling unhealthy after almost every time I eat. I don’t eat bad, today it was only some cooked jasmine rice (with soy sauce) that made me feel sick.

My wife and I are both vegan, and are actually probably pretty healthy compared to most of America. But we don’t eat like we should, or the way we used to. Specifically, we don’t get enough leafy greens, and we would like to eat more raw fruits and vegetables. And fermented foods (cabbage, beets, vegan yogurts, and kombucha, for example).

Also, I’ve put on some weight in the last couple of years that I don’t like, and can definitely afford to get in a little physical activity every day. Plus, now that we live in Washington state (just next to Portland), it’s easier than ever to pick up fresh organic produce from any of several markets in our city. I really have no excuse for ignoring my health and physical activity level like I have for the past year or so.

So I’ve decided to eat (mostly) raw for the next 30 days or so. This is not that hard since my wife and I are vegan and already prepare all of our food at home anyway, and we’ve gone full raw vegan before. I may adjust that time frame later based on how well I feel or don’t feel. It’s completely arbitrary, but at least I have a guideline.

I wrote “mostly” raw because we have a lot of winter squash, and I believe boiled and steamed winter squash to be quite healthy and full of carbohydrates and nutrients. Also, boiled/steamed sweet potatoes are ok. I will probably also consume soy milk and almond milk (with tea) and coffee, none of which are raw. Except the tea, but that’s in parentheses, so it doesn’t count. Actually, I’m not sure where tea falls on the rawness scale.

Tonight my wife and I went to our local supermarket and stocked up on foods that we need, and I started out the raw phase tonight by eating some baby spinach with boiled pumpkin and raw vegan Kimchi.

Since tomorrow is the first day of going mostly raw officially, today is day zero. I intend to document here my progress (what I eat) and how I feel, especially if I notice a big change in energy level.