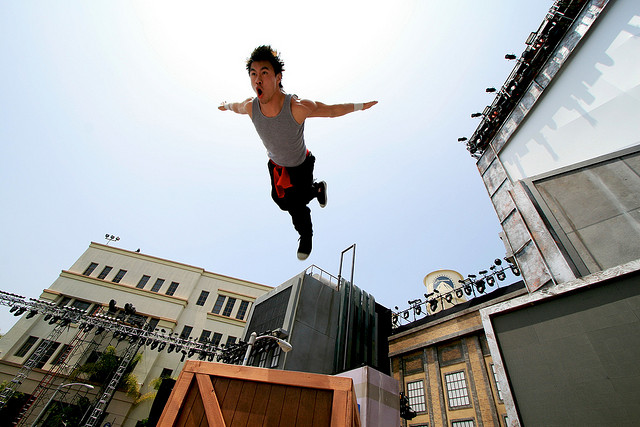 Note: I originally wrote this in July 2010, 5 years ago, but never posted it. Five years! That’s crazy. Obviously a lot has changed since then, and I wish that I’d posted this waaay back then. But the point I was trying to make still holds true, even more now, since it’s like I was writing for myself. My future self. It’s like a time machine, but in reverse. Crazy, man.

Last weekend at American Rendezvous 2k10, I met another participant named Ozzi Quintero from Hawaii (originally from Venezuela). This guy was probably the most hardcore guy at the event, is responsible for Hawaii Parkour (aka HIpk), and has some videos on youtube. I was quite impressed with Ozzi’s abilities, (one of which includes a handstand initiated from a standing position without kicking himself up). He’s also got a well-built physique.

In short, Ozzi is awesome. But he wasn’t born awesome, he had to work for it. He had to work his ass off to develop the stability, balance, physique, etc. that makes him a great traceur. He has been in the proverbial trenches, spending time in the weight room, performing exercises to develop balance, quadrupedal movement, etc., and the awesomeness shows through as a result.

I’d like to be like Ozzi, but I wasn’t born with his genetics, so I can’t. It’s too bad.

You Can Do It

One thing I hate is to hear someone say “man I wish I were… (thinner, richer, whatever..er)”, or “I want _____ more than anything in the world”, and then do nothing at all about it, nothing to improve his/her situation.

That person is lying to everyone, and probably most importantly, lying to (him|her)self. The fact is, if you really want something, you’ll find a way to make it happen.

Want to be thinner? Change your damn diet and start exercising. For me, becoming a vegan, getting serious about lifting weights and starting Parkour all at about the same time have completely changed my life. I’m not saying anyone should follow any particular diet or lifestyle, but eating McDonald’s, Sonic and even Subway (gasp!) ain’t gonna cut it if you’re fat and want to lose weight. In fact, you’ll probably have to stop eating out. Also, if you consume a lot of beer on weekends, that will have to go as well. It may seem like a drastic change, and indeed it is, but…

“No one will ever change until the pain of staying the same becomes greater than the pain of change.”
— Jack Daniels

Want to be richer? Start researching how to be richer. Google it, click on some links. Follow links on those pages to other pages. Read the right books.

Wanna learn to play the guitar? Go to a music store, buy a basic guitar, and inquire about lessons. Even if the store doesn’t give lessons, they can point you to someone who can.

Or maybe you’d like to learn a new language? Take a look at Benny, he’s learned 7 and he’s still not finished. Go buy a book on your language of choice. Take classes at school/college/university. Ask a friend to help (nicely!). Check out the (free) resources on the net: check out livemocha.com or ielanguages.com.

But know that whatever it is you want to do, it’s not going to fall into your lap. Because…

“Nothing in this life that’s worth having comes easy.”
— Dr. Kelso

Much like Ozzi in the example above, you’ve got to put in the effort if you want to reach your goals. But if you really want to do it, you will. I promise. 😉

With the power of the internet, pretty much the entire knowledge of the world is at our fingertips. The old excuse “I don’t know how” is no longer valid.

So please, stop lying to me, everyone else, and above all, yourself. If you really want to do something, just go do it.

All the good things you want to do in your life have to be started in the next few hours, days or weeks. — Tom DeMarco

If you get nothing else out of this, please, take action on something today — whatever it is you want to do, no matter how big it is. Because if you don’t, you may never get around to it.

Switched themes again, this time so that the site would have a responsive theme. The theme is a default WordPress theme, ‘Twenty-Fifteen’ by Automattic. It’s got a large default font, is clean and responsive… I’m not looking for much in a theme, and this one ticks off all the boxes, for now.

Also, hope to have some more posts up soon. I’ve got a few projects in the works, namely, my consulting site, nathanmarley.com and some book ideas that I need to flesh out. Also working on a Northwest Arkansas local cleaning service business that I’m running with my wife, Maid in NWA.

So hopefully, this blog will see some changes soon, as well as a lot of new and interesting content.